Inicio › Publicaciones › Handbook of Revolutions in the 21st Century

Handbook of Revolutions in the 21st Century

Handbook of Revolutions in the 21st Century
The New Waves of Revolutions, and the Causes and Effects of Disruptive Political Change 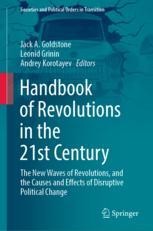 The 21st century has witnessed a considerable and increasing number of political revolutions around the world. This contradicts the popular belief of many experts in the 1970s that revolutions occurred mainly in monarchies and empires. Instead, the revolutions of this century have several new characteristics, which call for a renewed analysis of the subject.

The handbook is divided into seven parts, the first of which examines the history of views on revolution and important aspects of the theory of revolution. The second part analyzes revolutions within long-term historical trends and in their world-system contexts. In turn, the third part explores specific major revolutionary waves in history. The fourth part analyzes the first revolutionary wave of the 21st century (2000–2009), the so-called color revolutions, while the fifth discusses the second wave – the Arab Spring (2010–2013) – as an important turning point. The sixth part is dedicated to analyzing revolutions and revolutionary movements beyond the Arab Spring and some revolutionary events from the third wave that began in 2018. The seventh and final part offers forecasts on the future of revolutions. Given its scope, the book will appeal to scholars and students from various disciplines interested in historical trends, sociopolitical change, contentious politics, social movements, and revolutionary processes involving both nonviolent campaigns and political violence.