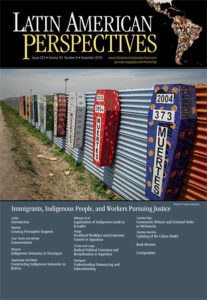 Latin American Perspectives is a theoretical and scholarly journal, founded in 1974, for discussion and debate on the political economy of capitalism, imperialism, and socialism in the Americas. Most issues focus on a single problem, nation, or region, providing an in-depth analysis from scholars and  participants in social change throughout the hemisphere.

The journal combines studies of economics, political science, sociology, geography, anthropology, international relations, history, philosophy, and culture to offer a vital multidisciplinary view of the powerful forces impacting the lives of people across the Americas.

Latin American Perspectives is expecially committed to bringing the work of Latin American scholars to an English-speaking public and to providing a forum for scholars and activists around the world to engage in the most timely analyses of current social issues, structures, and movements and of Latin America’s insertion into the international political and economic system.