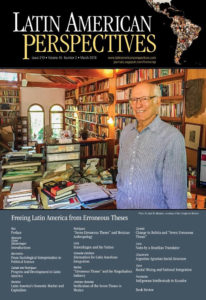 More than a half century after the publication of Rodolfo Stavenhagen’s landmark essay “7 Erroneous Thesis about Latin America”, its critique of dominant development thinking remains sharp, as was shown at a colloquium hosted by El Colegio de México 50 years to the day after the publication of  the original text. The debate at the colloquium opened a new opportunity to rethink and place Stavenhagen’s theories in today’s context. In this latest issue of LAP, we are glad to bring together some of the essays written by participants in this vibrant debate. The essays analyse the relevance of Stavenhagen’s critique as well as the changes the continent has gone through and the new challenges it faces in today’s rapidly changing global order. In this manner, we hope to honor and celebrate Stavenhagen’s legacy as one of the great Latin American scholars of the long twentieth century, and to provoke further debate that shines light on the continent of the open veins.