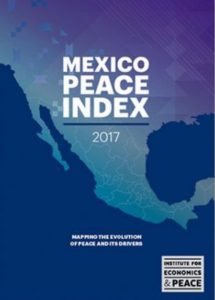 This research, now in its fifth year, aims to identify the key trends, patterns and drivers of peace while highlighting policy opportunities. The MPI report includes an analysis of the economic benefits that will flow from a more peaceful society and provides a backdrop for strategic discussions among policymakers, researchers, business leaders and the general public on building peace in Mexico.

Mexico’s peacefulness deteriorated by 4.3 percent in 2016. Last year marks both the ten-year anniversary of the declaration of the war on drugs and the first deterioration in peacefulness since the recovery began in 2012. Mexico’s most violent year was 2011, when domestic military deployments peaked and the homicide rate rose to double that of 2006. In 2012, the country began to recover — an improving trend that was maintained for the next four years. However, in 2016, the homicide rate rose 18 percent and the use and availability of firearms increased, resulting in a less peaceful overall MPI score.