Silence Would be Treason

Silence Would Be Treason. Last writings of Ken Saro-Wiwa 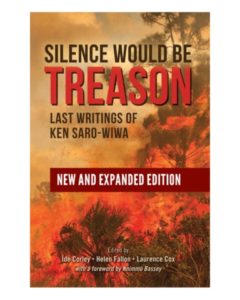 Silence Would be Treason

In 1995 the Nigerian military dictatorship executed Ken Saro-Wiwa and 8 other Ogoni activists to end their opposition to Shell’s activities in the Niger Delta. This was the culmination of a campaign of terror in which security forces killed perhaps 2,000 Ogoni with many more raped, injured, tortured or made homeless. The indigenous Ogoni had organised to resist the ecological destruction of the wetlands they were dependent on, to demand fair distribution of the profits, and to call for self-determination and human rights. Saro-Wiwa, as a leading Nigerian writer of Ogoni origin, took a leading part in this campaign and paid the price.

“Silence Would be Treason” contains Saro-Wiwa’s last letters and poems from military detention, written to Irish solidarity activist Sister Majella McCarron. They show a fine mind on trial for his life, organising the international campaign for the release and finally the lives of the “Ogoni 9”, strategizing about the future of the struggle against Shell, and living life to the full. They are gripping, harrowing, at times hilarious and immensely readable. The letters were donated by Sr Majella to Maynooth Library in 2011, transcribed and edited by librarian Helen Fallon, African Studies specialist Íde Corley and social movement researcher Laurence Cox, with a foreword by environmental activist and writer Nnimmo Bassey.

This book was first published in print form in 2013 by the non-profit African publisher Daraja together with CODESRIA, the Council for the Development of Social Science Research in Africa, and supported by Trócaire. Thanks to Daraja Press it is now available in a new and expanded edition as a free ebook, which can be downloaded in PDF at http://eprints.maynoothuniversity.ie/8940/ or read online at https://darajapress14.pressbooks.com/.