Inicio › Publicaciones › Voices of 1968. Documents from the Global North

Voices of 1968. Documents from the Global North

Voices of 1968
Documents from the Global North 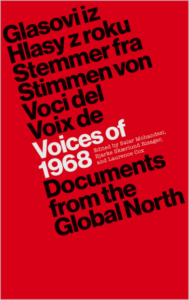 Voices of 1968. Documents from the Global North

The year 1968 witnessed one of the great upheavals of the twentieth century, as social movements shook every continent. Across the Global North, people rebelled against post-war conformity and patriarchy, authoritarian education and factory work, imperialism and the Cold War. They took over workplaces and universities, created their own media, art and humour, and imagined another world. The legacy of 1968 lives on in many of today’s struggles, yet it is often misunderstood and caricatured.

Voices of 1968 is a vivid collection of original texts from the movements of the long 1968. We hear these struggles in their own words, showing their creativity and diversity. We see feminism, black power, anti-war activism, armed struggle, indigenous movements, ecology, dissidence, counter-culture, trade unionism, radical education, lesbian and gay struggles, and more take the stage.

Salar Mohandesi is an Assistant Professor of History at Bowdoin College and a founding editor of Viewpoint Magazine. His current project, From Anti-Imperialism to Human Rights, traces the history of transnational anti-Vietnam War activism.

Bjarke Skærlund Risager is a Postdoctoral Fellow in the Department of Geography & Planning, University of Toronto where he works on a project on resistance to gentrification and precarity under post-industrialisation. He recently co-edited Property Claims: What Disagreement Tells us about Ownership (Routledge, 2018). He is the co-editor of Revolution in the Air?: 1968 in the Global North(Pluto, 2018).

Laurence Cox is Senior Lecturer in Sociology, National University of Ireland Maynooth. A long-time activist, he co-founded the social movement journal Interface and researches popular struggles for a better world. He is co-author of We Make Our Own History: Marxism, Social Movements and the Twilight of Neoliberalism (Pluto, 2014) and co-editor of Revolution in the Air?: 1968 in the Global North (Pluto, 2018).

5. Great Britain
Introduction
Dave Slaney: The occupation of LSE (1968)
J.W.: Network: or How We beat the Gallery System (1969)
International Times: “People Round about Living in Fear” (1970)
Black Women’s Action Committee: The Oppressed of the Oppressed (1971)
Gay Liberation Front: Manifesto (1971)

12. Yugoslavia
Introduction
Demonstrators’ Action Committee and Students’ Assembly in Student City: Resolution of the Student Demonstration (1968)
Members of the Rally, Students and Professors: Comrade Workers, Citizens, and Youth (1968)
Plenum of the University Committee of the Student Union at the University of Belgrade, University Committee of the League of Communists at the University of Belgrade and the Student Action Committee of All Faculties, Colleges and Academies in Belgrade: Political Action Programme (1968)
Proclamation of the Revolutionary Students of the Socialist University “Seven Secretaries of the Young Communist League” (1968)
Discussion held by the General Assembly of the Philosophy and Sociology Faculty (1968)
Further reading