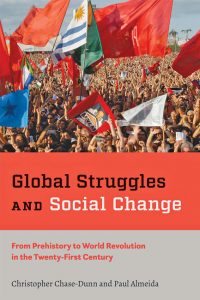 Christopher Chase-Dunn is a Distinguished Professor of Sociology at the University of California, Riverside, where he is the director of the Institute for Research on World-Systems. He is the coauthor of Social Change: Globalization from the Stone Age to the Present.

Paul Almeida is a professor of sociology at the University of California, Merced. He is the author of Social Movements: The Structure of Collective Mobilization.

In the early decades of the twenty-first century, an international movement to slow the pace of climate change mushroomed across the globe. The self-proclaimed Climate Justice movement urges immediate action to reduce carbon emissions and calls for the adoption of bold new policies to address global warming before irreversible and catastrophic damage threatens the habitability of the planet. On another front, since the 1980s, multiple waves of resistance have occurred around the world against the uneven transition from state-led development to the neoliberal globalization project. Both Climate Justice and Anti-Austerity movements represent the urgency of understanding how global change affects the ability of citizens around the world to mobilize and protect themselves from planetary warming and the loss of social protections granted in earlier eras.

In Global Struggles and Social Change, Christopher Chase-Dunn and Paul Almeida explore how global change stimulates the formation and shape of such movements. Contending that large-scale economic shifts condition the pattern of social movement mobilizations around the world, the authors trace these trends back to premodern societies, revealing how severe disruptions of indigenous communities led to innovative collective actions throughout history. Drawing on historical case studies, world system and protest event analysis, and social networks, they also examine the influence of global change processes on local, national, and transnational social movements and explain how in turn these movements shape institutional shifts.

Touching on hot-button topics, including global warming, immigrant rights protests, the rise of right- wing populism, and the 2008 financial crisis, the book also explores a broad range of premodern social movements from indigenous people in the Americas, Mesopotamia, and China. The authors pay special attention to periods of disruption and external threats, as well as the role of elites, emotions, charisma, and religion or spirituality in shaping protest movements. Providing sweeping coverage, Global Struggles and Social Change is perfect for students and anyone interested in globalization, international and comparative politics, political sociology, and communication studies.

«The authors succeed in synthesizing two very large and prominent bodies of social science research, demonstrating how the periodic rise and fall of social movements follow political-economic developments in world empires and systems. The scholarship is more than sound; it is masterful. The clarity of the writing, along with the treatment of contemporary examples, will make this a widely required text.»