Interface
a journal for and about social movements

Rising up against institutional racism in the Americas and beyond (issue 13/2)
Vol 13 Issue 2 www.interfacejournal.net 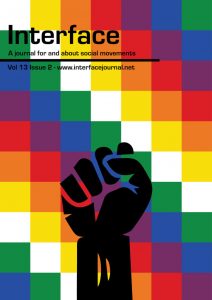 This special issue of Interface explores the movements against institutional racism that have spread across the Americas and beyond in the wake of the murder of George Floyd. Highlighting the emergence of antiracist movements in Latin America as well as North America and beyond, it develops a multilogue for movement learning between Black / Indigenous / mestizo and other movements and between Anglo and Hispanic America, bridging the global North and global South. Articles discuss the grammars of anti-racism, law and race, the hierarchies of class, gender and race, anti-indigenous racism and its Indigenous contestation, Indigenous women’s defence of the body and of territory in the pandemic, the 2020 moment in the US, South Asian American involvement in the uprising, the complexities of White activism, colourism in Black America, BDS as a global antiracist movement and more.

General pieces discuss the Chilean uprising, feminist responses to masculinism, Deaf activist interpreting, community struggles in Mexico, the need for creative resistance, migrant struggles in the US, freedom of information work and what movements can learn from AIDS activism. We also review recent books on nonviolence, direct action, resistance to extractivism, the politics of Asian modernity, living with austerity, and Venezuelan movements.

This is our twenty-sixth issue, with 554 pages and 28 pieces covering movements in Argentina, Brazil, Canada, Chile, Colombia, Ecuador, France, Greece, Guatemala, India, Italy, Mexico, Pakistan, Peru, Portugal, Spain, Tibet, the US, Venezuela and globally and pieces in Spanish and English.

You can download articles individually or a complete PDF of the issue (11.7 MB), from interfacejournal.net.