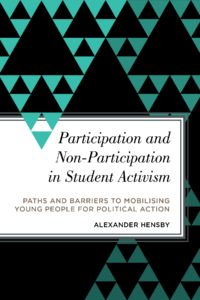 Why might some students convert their political interests into activism when others do not? There is a strong need to understand the changing dynamics of contemporary youth participation: how they engage, what repertoires are considered efficacious, and their motivations to get involved.

This book uses the 2010/11 UK student protests against fees and cuts as a case study for analysing some of the key paths and barriers to political participation today. These paths and barriers – which include an individual’s family socialisation, network positioning, and group identification (and dis-identification) – help us explain why some people convert their political sympathies and interests into action, and why others do not. Drawing on an original survey dataset of students, the book shows how and why students responded in the way that they did, whether by occupying buildings, joining marches, signing petitions, or not participating at all. Considering this in the context of other student movements across the globe, the book’s combination of quantitative and qualitative methods, and its theoretical contribution provide a more holistic picture of student protest than is found in existing studies.

3. Student activism past and present: opportunities, constraints, and repertoires of contention

4. Who participates? Patterns of student political engagement and action

5. Becoming a participant: activism mobilization and the university campus

6. Being a participant: commitment, radicalization and the building of collective identities

7. Being a non-participant:uncertainty, dis-identification and the ‘caring but not committed’