Political Invisibility and Mobilization
Women against State Violence in Argentina, Yugoslavia, and Liberia 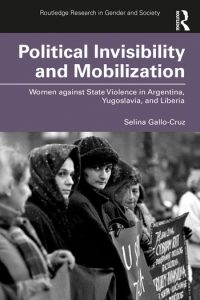 Political Invisibility and Mobilization explores the unseen opportunities available to those considered irrelevant and disregarded during periods of violent repression. In a comparative study of three women’s peace movements, in Argentina, the former Yugoslavia, and Liberia, the concept of political invisibility is developed to identify the unexpected beneficial effects of marginalization in the face of regime violence and civil war. Each chapter details the unique ways these movements avoided being targeted as threats to regime power and how they utilized free spaces to mobilize for peace. Their organizing efforts among international networks are described as a form of field-shifting that gained them the authority to expand their work at home to bring an end to war and rebuild society. The robust conceptual framework developed herein offers new ways to analyze the variations and nuances of how social status interacts with opportunities for effective activism. This book presents a sophisticated theory of political invisibility with historical detail from three remarkable stories of courage in the face of atrocity. With relevance for political sociology, social movement studies, women’s studies, and peace and conflict studies, it contributes to scholarly understanding of mobilization in repressive states while also offering strategic insight to movement practitioners.

Selina Gallo-Cruz is an Associate Professor at the College of the Holy Cross in Worcester, Massachusetts. Her research has contributed broadly to the fields of cultural, political, and global sociology, centering on questions about how cultural beliefs, values, assumptions, and practices shape social movement mobilization.