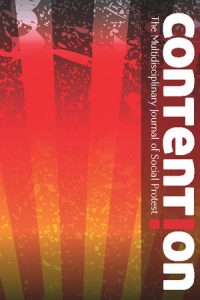 Contention has now reached its eighth volume and fifteenth issue, and we have been delighted to see the journal move from attainment to attainment over the past eight years. Contention has developed a reputation for publishing high-quality research, articles, and analyses in the fields of social protest, collective action, and contentious politics, soliciting contributions from world-leading scholars and early career academics alike. Its articles are strongly interdisciplinary and global in nature, with the journal offering a platform for research that crosses old-fashioned national and theoretical boundaries. We were delighted to see such merits recognized by the recent inclusion of Contention in the SCOPUS database. Together with the European Reference Index for the Humanities and Social Sciences, where the journal is already indexed, the inclusion of Contention in SCOPUS will bring further visibility to the scholarly work we publish, facilitating its diffusion by providing an even stronger opportunity to contribute to international scholarly dialogue.

There was no more timely opportunity, therefore, to publish Dimitris Soudias and Tareq Sydiq’s Special Section titled “The Spatiality of Protest.” As the two authors note in their introduction, “Theorizing the Spatiality of Protest,” the concept of space remains undertheorized in social movement studies, with its fruitful empirical promises and theoretical implications having been somewhat underexploited. People’s expressions of dissent are made significant and poignant not only by what is said or by how it is said. Rather, protest actions also acquire meaning as a function of where people are able to express their grievances. Even more importantly, spaces intersect with relationships, fostering solidarity and creating opportunities for mobilization. These are important lessons that—though seldom at the center of social scientists’ attention—have certainly been learned by the political authorities in many areas of the world. It is becoming more and more common that authorities attempt to defuse dissent not by forbidding it directly but by making it invisible and therefore irrelevant.

In the first article of the special section, “Spatializing Radical Political Imaginaries: Neoliberalism, Crisis, and Transformative Experience in the Syntagma Square Occupation in Greece,” Soudias analyzes interviews and participant observation data gathered during the occupation of Syntagma Square—one of the most important public spaces in Athens. Soudias’s article engages with the mutually constitutive nature of this space and its meaning during the occupation, as well as with the role of space in the development of people’s willingness and ability to question the status quo.

The special section’s second article, “The Role of Spatial Organization in Resurrection City and Other Protest Camps” by Fabian Frenzel, draws on both social movement and organization studies to examine the role of spatial arrangements in social mobilization. The article emphasizes how the organizational requirements, aims, and objectives of movements interact dynamically with spatial opportunities and constraints to foster the emergence of new repertoires of contention.

In “Asymmetries of Spatial Contestations: Controlling Protest Spaces and Coalition-Building during the Iranian December 2017 Protests,” Tareq Sydiq draws on firsthand fieldwork in Iran to analyze the country’s 2017–2018 protests. Sydiq uncovers the role of the dynamic interactions between the state, protest actors, and different types of physical and social spaces in shaping crossmovement alliance formation during this period.

Moving along similar conceptual lines, in “Material Obstacles to Protest in the Urban Build Environment: Insights from Jordan,” Jillian Schwedler draws on archival materials and original qualitative data to examine the nexus between space and protest in Amman, Jordan. In her analysis, Schwedler offers a novel typology for understanding the way in which the built environment can be altered to prevent people’s engagement in protest. Her typology, which emphasizes the use of urban expansion, development projects, and more direct efforts from the authorities to make space inaccessible, is an important heuristic device meant to stimulate research aimed at testing the generalizability of the model across multiple sites.

This issue of Contention is drawn to a close by Gustavo Hessmann Dalaqua’s article, “Using Art to Resist Epistemic Injustice: The Aesthetics of the Oppressed and Democratic Freedom.” Not formally part of the special section, but complementary to its general message, Dalaqua’s contribution concerns a different kind of contentious space: that of the theater. His article considers the resistant potential of a series of practices developed by the Brazilian theater practitioner and activist Augusto Boal. These practices produce meaning that alter individuals’ collective view of the status quo, enabling them to pursue change at different levels and force collective identities and solidarity.

Altogether, the articles in this issue draw attention to the scholarly benefit of fruitful interdisciplinary theorizing and analysis. Standing at the intersection of different research fields, such multidisciplinary projects can create space for novel accounts of reality that reflect the depth and variety of human experience without having to rely on conventional thinking. Contention will continue promote this type of interdisciplinary dialogue as the journal heads into the future.